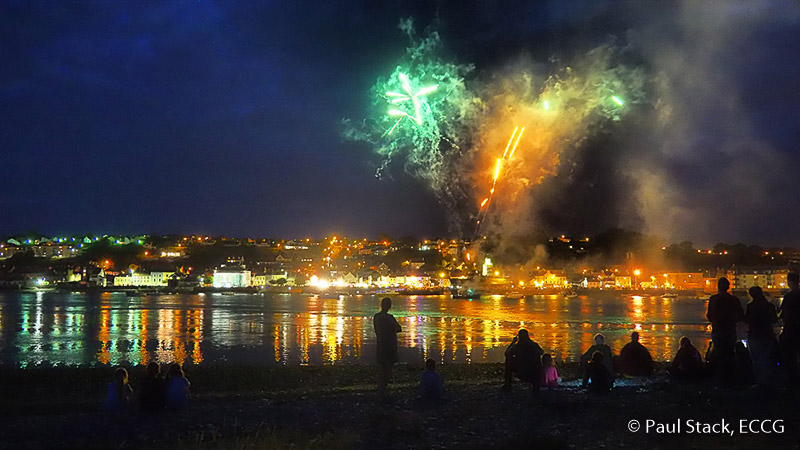 On Sunday 15th July, the Youghal Queen of the Sea festival concluded with a spectacular fireworks display. The suggested viewpoint for photography was Ferrypoint in Co. Waterford with a panoramic view across the Blackwater River towards the town of Youghal. Walking around the shore at Ferrypoint provided views of the quays, the Clock Gate Tower overlooking the buildings, to Youghal Lighthouse, Capel Island and Knockadoon Head further south beyond Youghal Bay.

On arrival at Ferrypoint, they were plenty of people camped out with the Bee Gees Tribute band playing across the river and enjoying the fine evening. Before the main event, there was ample opportunity to set up the camera and make a few trial images. As darkness approached, beautiful reflections appeared in the channel to add to the scene. A good crowd gathered in anticipation of the fireworks including a group celebrating a birthday.

On conclusion of all the Bee Gees hits, the fireworks burst into the sky. There was plenty of variety in the bursts which gave me ample opportunity to test the Fireworks mode in the camera. With the backdrop of Youghal town, the spectators appreciated the show, although one baby did not share the same enthusiasm. The last few fireworks were fired high in the sky above us to bring the festival to an end - with a bang...

See a gallery of images from the shoot here. Enjoy! 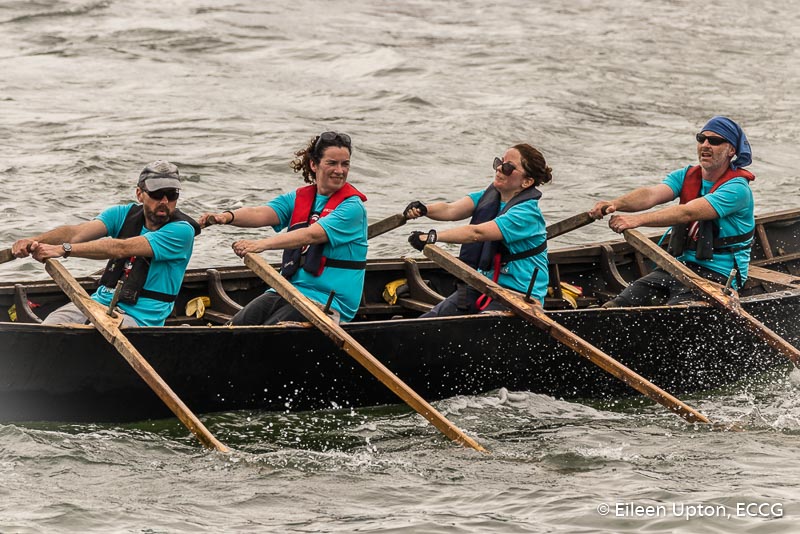 Cork Harbour Festival is the largest annual event in Cork Harbour with a nine-day celebration of maritime culture and heritage. There are over 70 events in Cork City and the harbour towns and villages.

Ocean to City - An Rás Mór is the flagship event of the Cork Harbour Festival and is Ireland's very own long-distance rowing race. The first race was held in 2005 and was originally a race for traditional fixed-seat boats. It has now grown into an annual event for an all-inclusive rowing and paddling event embracing everything from traditional wooden working boats, currachs, skiffs, gigs and Chinese dragon boats to contemporary ocean racing shells, kayaks, canoes and even stand-up paddle boards, attracting over 600 Irish and international participants from the U.S., Germany, Spain, the Netherlands and the United Kingdom, crewing over 200 craft. 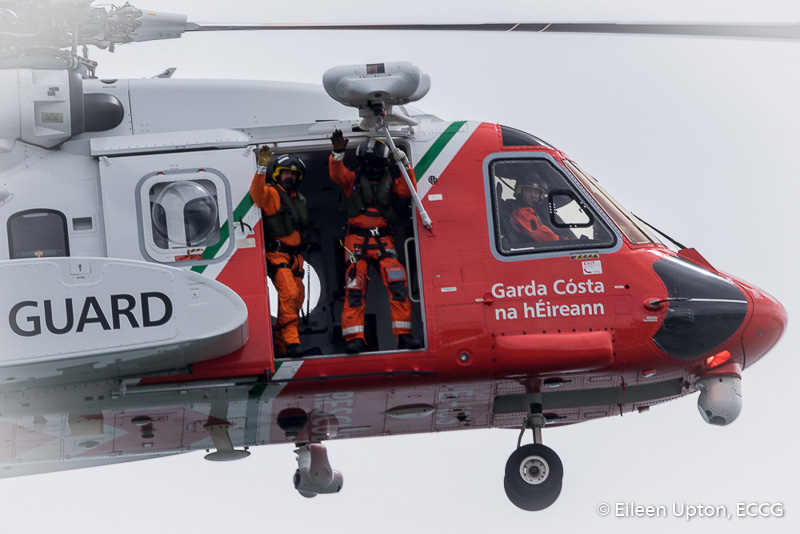 On Saturday, 2nd June, our Group took up many vantage points along Cork Harbour and waited for the race to begin. The Irish Coast Guard Rescue Helicopter together with the Crosshaven Coast Guard Boat and the RNLI inshore Life Boat carried out a demonstration training exercise to entertain the crowds waiting on the Promenade in Cobh. At 2.30pm. the race began at Crosshaven and it was not long before the colourful spectacle of all sizes of boats and crews could be seen rounding the Spitbank and turning towards Cobh. As the rowers passed by Cobh, they were greeted by shouts of encouragement from all those waiting along the quay. Even though some participants were under pressure at times to keep going, they managed to wave to the crowds, such was the festive atmosphere on the day. 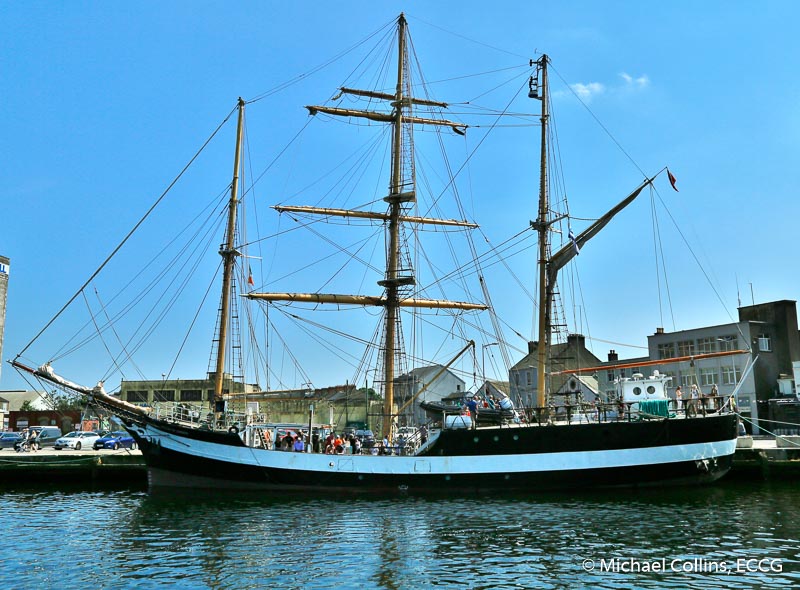 The magnificent tall ship, Pelican of London, paid a visit to Cork Harbour during the Festival. It was built in 1948 and first served as an Arctic trawler and then a coastal trading vessel. In 2007, after a twelve-year rebuild, she became a sail training ship with Sail Training Ireland. 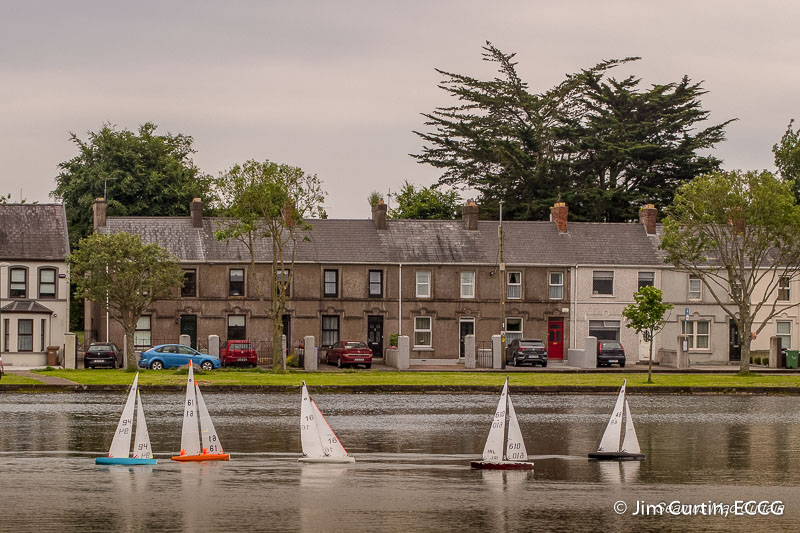 Cork Model Yacht Club celebrates its 80th anniversary in existence at The Lough. On Sunday 10th June, the Club gave a demonstration of competitive radio controlled model yacht racing, based on the International One Meter Racing Class. These yachts cover a meter every 20 seconds and are quite spectacular to watch especially in the presence of a good wind when they really pick up the pace! Sailing takes place around a series of buoys and a race will last between 15 and 20 minutes.

East Cork Camera Group attended some of the many events of the Festival to capture the atmosphere and enjoyment felt by all participants and you can see a gallery of images from them by clicking here. Enjoy!