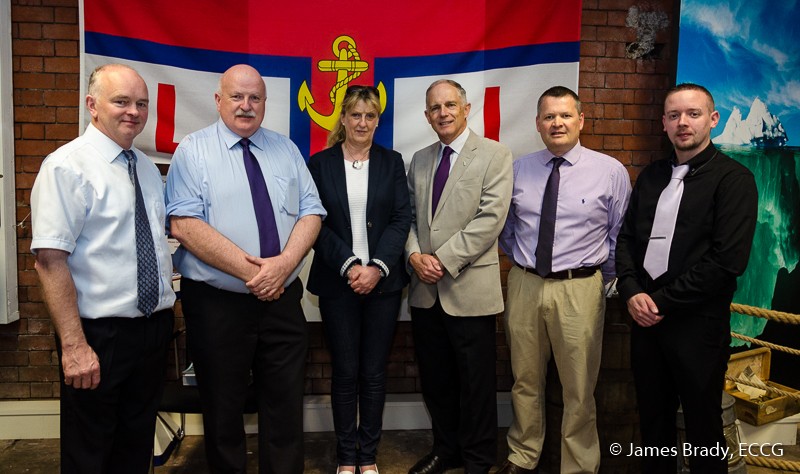 On Saturday 2/7/16, Minister of State at the Dept. of Justice and Equality, Mr. David Stanton TD, performed  the official opening of our Cruise Liner / Lusitania Exhibition at the Cobh Maritime Building at Cobh Rail Station.

The exhibition is the culmination of a project to photograph all the cruise liner visits to Cork harbour during the 2015 season which amounted to 33 ships and 57 visits. Added to this was a number of images from the Lusitania Centenary Events that were held in May of the same year.

A gallery of images from each visit was posted to the project webpage which by the end of the project contained over 1,000 images. Ideas for an exhibition soon began to emerge and when the idea was initially suggested, the Port of Cork's Mr. Michael McCarthy responded positively and made the Cobh Maritime Building available to us for the month of July 2016. 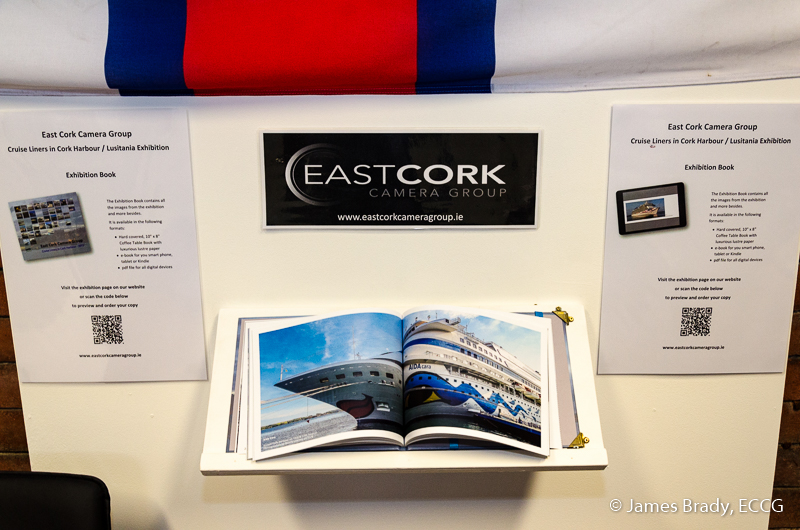 The Exhibition Book on display at the Cobh Maritime Building

Planning soon got under way resulting in 46 frames containing over 100 images which were expertly printed, mounted and framed by Don Magee and his staff at Art and Frame, Model Farm Road, Cork. Added to this was a companion exhibition book available in print and as an e-book along with a free Exhibition App for mobile devices - all available from the club website.

In keeping with the maritime theme of this exhibition, we are delighted to make the Royal National Lifeboat Institution a beneficiary of the event and encourage all people visiting this free exhibition to make a donation in the RNLI collection box provided. 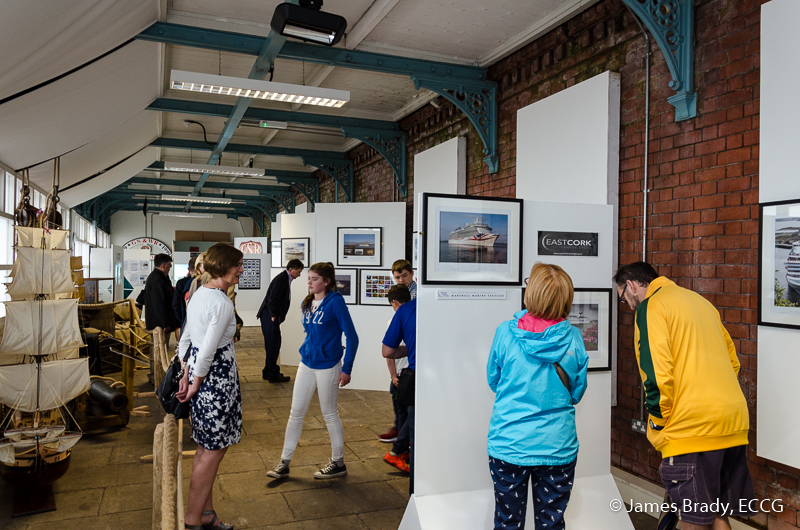 The exhibition exists because of a lot of good will, a lot of hours spent on it and a big commitment from a lot of people. Thanks to the ECCG committee as well as the members who contributed to the projects from the submission of images and dealing with the logistics of actually putting an exhibition like this together. Particular thanks is due to Finbarr O'Shea and Eileen Upton who actually put the exhibition in place.

Thanks to Mr. Michael McCarthy of Port of Cork, Cork County Council’s Cobh and East Cork Municipal Districts, Ben and the staff at the Maritime Building and all our sponsors (see the exhibition webpage for a full list), without whom, the exhibition could not have happened.

Finally, thanks tro our caterers, Days of Whitegate and our pianist, Ursula O'Tuama, who added a real sense of occasion to the opening.

Click here to see a gallery of images from the event. Enjoy!

Given that we shot all 57 cruise liners that called to Cork Harbour during the 2015 season, shooting another in the 2016 season was really not on the agenda but that's what happened on Sunday last 15/5/16.

With the recent and rare fine weather, sunsets are the order of the day at the moment and with low water at around sunset, we headed for the lower harbour and decided on the elevated site near Fort Davis in Whitegate, East Cork.

The sunset, while nice, wasn't brilliant but off in the distance, berthed at Cobh Cruise Terminal, lay the 333m long MSC Splendida which was due to depart about an hour after sunset. Having been on board this beautiful ship nearly twelve months ago, ECCG has a particular fondness for her so we decided to wait and see her off.

In the distance we could see it had silently slipped from the berth and was moving past Cobh. Slowly, with the Cork Pilot Launch at her heel, Splendida came around the Spit Bank Light, past the Whitegate Oil Refinery jetty and was a beautiful sight, all lit up in the blue hour, as it almost silently passed between Forts Davis and Camden towards Roches Point enroute to Southampton.

With a capacity for 4,363 passengers and 1,370 crew, Splendida is, effectively, a floating small town and this sight will be repeated many times over this season as upwards of 60 liners are due to visit Cork harbour this year. Check out the Port of Cork Cruise Liner schedule for dates and times.

Click here to see a small gallery of images from the shoot at Fort Davis. Enjoy! 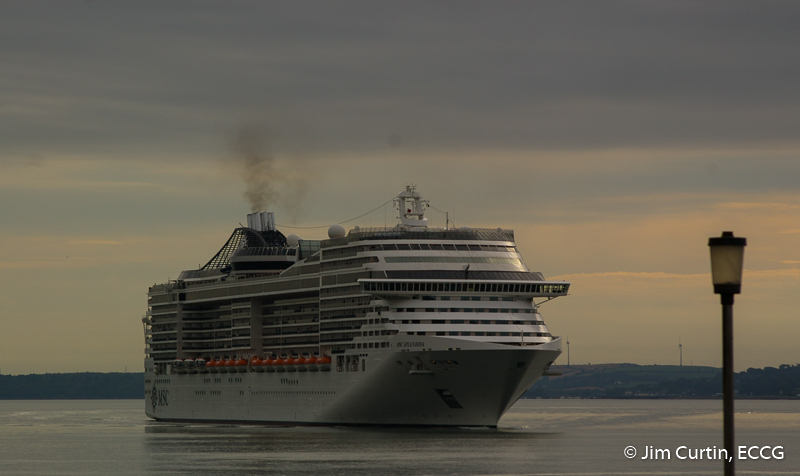 ECCG was delighted to be a guest of MSC Cruises on board their ship, MSC Splendida when she docked at Cobh Cruise Terminal yesterday for her third and final time this year.

Splendida was the fiftieth liner visit of the year to the port of Cork and arrived to beautiful weather that lasted all day up to and beyond her late, 9pm departure. The combination of this huge ship, the fine weather and it being a Sunday brought great crowds of onlookers to the harbour town just to get a glimpse of the ship and enjoy the associated activities on the quayside and in the town. 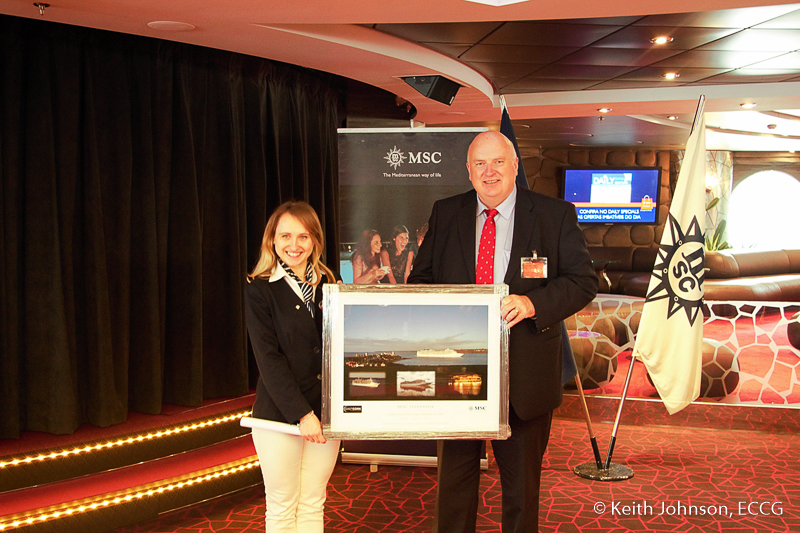 On board, we were taken for a beautiful meal in the very plush Villa Verde panoramic restaurant on Deck 6, following which we went to the Aft Lounge on Deck 7 for tea and coffee. During this we made a presentation of a framed series of images of the ship, taken in Cork harbour during 2015, to the ship's events manager, Ms. Anna Vakulenko. 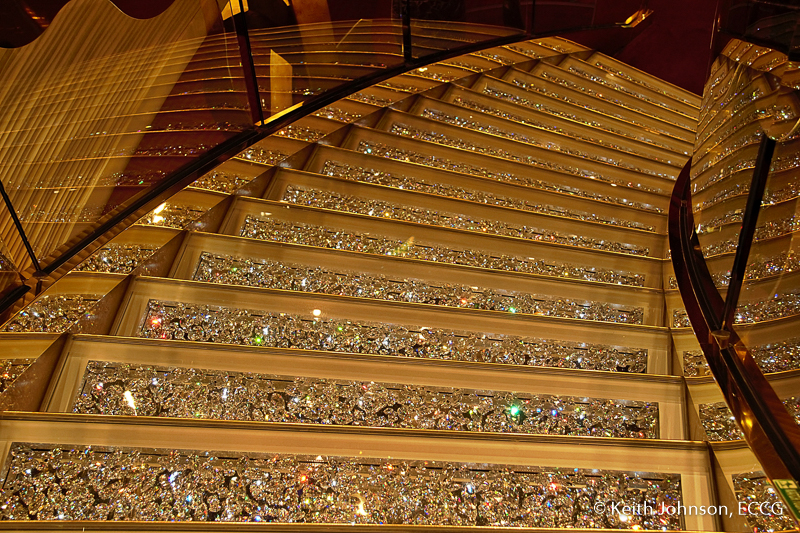 At this stage we did a tour of the ship taking in the wonderful Aqua Park featuring four outdoor pools and one indoor pool with a retractable roof - ideal for cruising in our weather. We also visited the shopping mall and casino as well as the many restaurants and wellness/fitness centres. The Sports bar with its two bowling lanes was an interesting feature while the stylish Reception area with its waterfall and Swarovski crystal stairs was really classy. 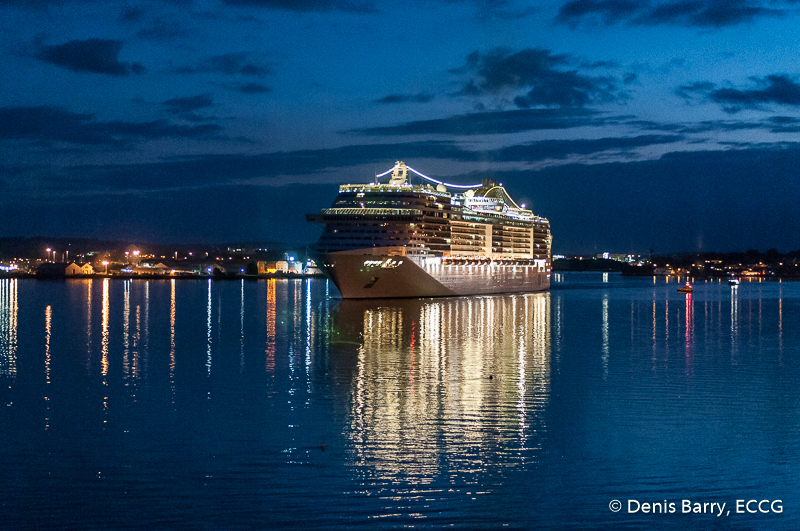 As the bells of St. Colman's Cathedral rang out for 9pm, three long blasts of the ship's whistle announced her impending departure. With mooring ropes cast off and recovered, she was off the berth and moving downriver past the town, dipping her deck lights a number of times in farewell. A beautiful sight in the blue hour, she slipped almost silently around the Spitbank light and headed for Roches Point and out of the harbour on her way to Southampton.

Many thanks to MSC Cruises for the invitation on board and we look forward to seeing your ships back in Cork again next year.

Click here to see a full gallery of images from the day. Enjoy!

The port of Cork's busy cruise liner traffic peaked the interest of ECCG this year to the extent that we decided to make it a project to photograph each ship that called to the port during the 2015 season. With fifty-five liner visits in total scheduled, we knew this would be a daunting task but undertook to do our utmost to pull it off. 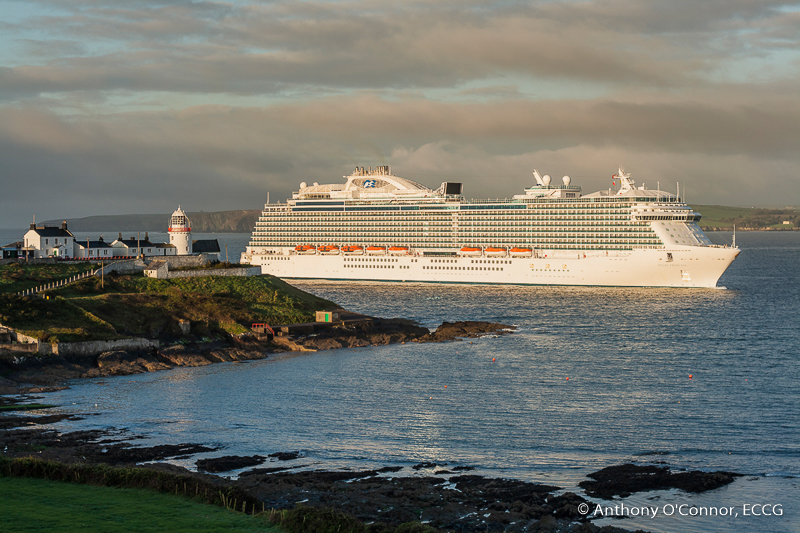 It all started on 25th April with the arrival of the Regal Princess on a beautiful sunny Saturday morning. Already, the first one was in the bag and the project was underway. May was a busy month with seventeen ships as well as the 100th anniversary of the Lusitania disaster but we managed to get them all. June saw nine ships in and there were eleven in July and we still had a full house.

After each shoot, we posted a gallery of images on our website and as the total began to soar towards 1,000 images, we realised that we had most vantage points in the harbour covered and that all our images were of the exterior of the ships taken as they arrived and departed and while berthed in the port. As the quest for fresh angles became increasingly difficult we felt that some interior shots of one of the majestic ships would be a nice departure and would compliment the shots we already had very nicely. As Princess Cruises were the most frequent line to visit the port with fourteen calls and Royal Princess was the most frequent ship to visit with ten calls, we felt that she should be the ship to photograph if at all possible. That event happened today. 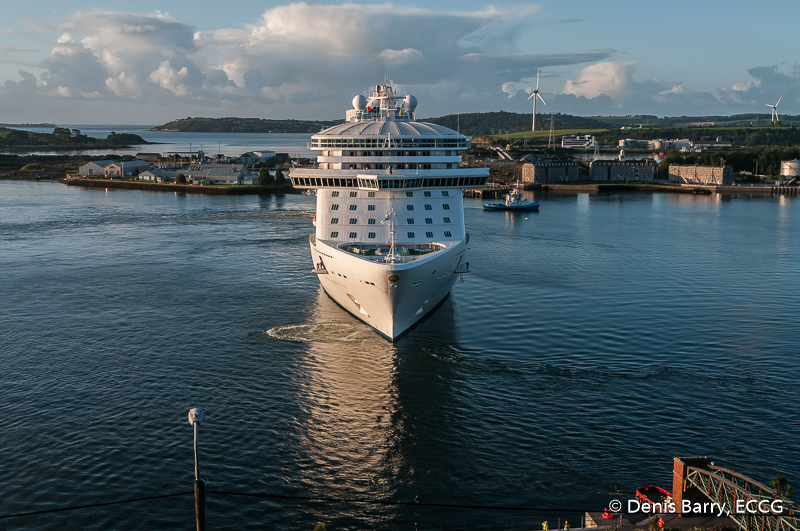 As the clock ticked past 6.30am, Royal Princess, with its 3,600 passengers and 1,300 crew on board, was visible from Cobh at Roches Point. On her tenth and final visit of the season, she was the 46th liner of the year and the first of three to call on this day. As she made her way between Forts Davis and Meagher, the sun began to spread its magic over the harbour and bathed the ship in a golden glow as she did a 180 degree turn and went alongside at Cobh Cruise Terminal. 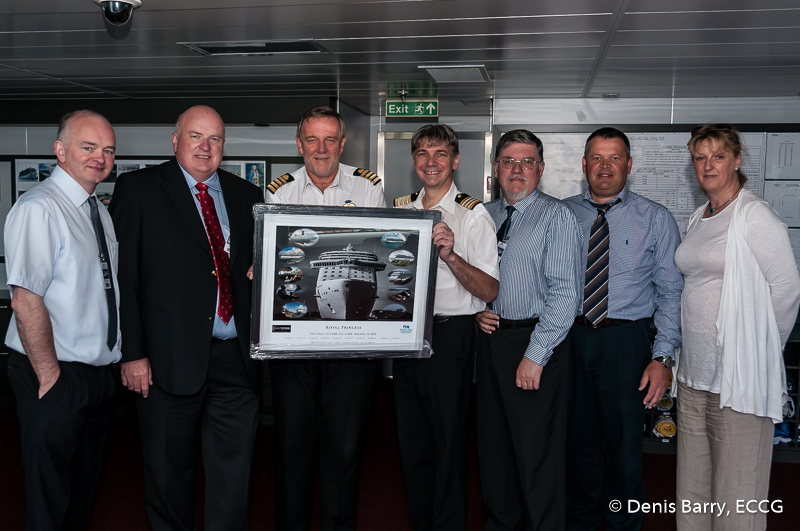 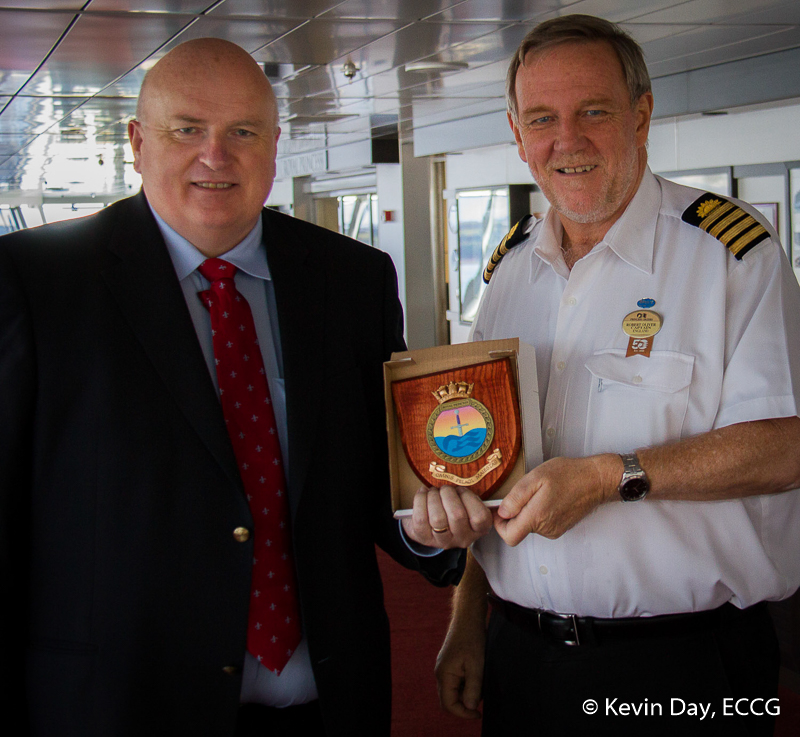 At 10am we boarded the ship and were taken directly to the bridge by our guide, Miranda, where we met the Captain, Robert Oliver and the Hotel General Manager, Michael Prasse. We made a presentation of a framed series of images of the ship on her visits to the port and were delighted to receive a ship's plaque from Captain Oliver in return. The view from the bridge was outstanding and set the tone for the day's shooting that lay ahead. 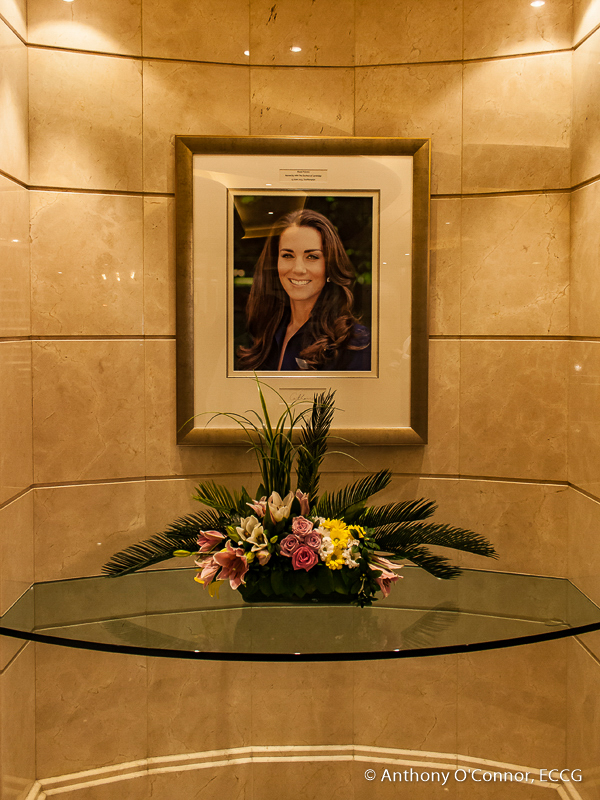 Thereafter, we toured the ship and took in her splendour. Only two years old, she was named by the Duchess of Cambridge on the 13th June 2013 and like her 'godmother', exudes elegance and style at every turn. Among her highlights, the Royal Princess offers a larger and expanded atrium with additional entertainment and casual dining options and it boasts the largest top deck pool ever with Princess Watercolor Fantasy, an enhanced Movies Under the Stars screen, and a SeaWalk with views 128 feet straight down through the glass floor! 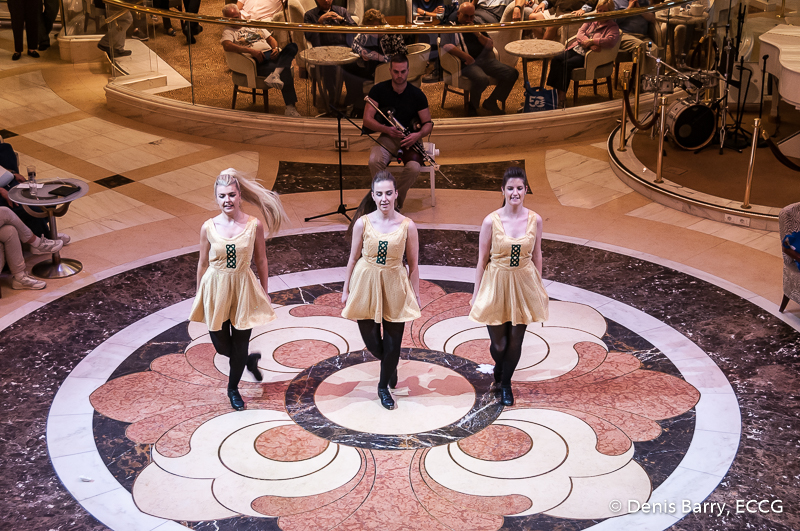 Having worked up an appetite, we adjourned to the Horizon Court restaurant on Deck 16, for lunch, for which the choice was seemingly unending. It was really relaxed and enjoyable and afterwards we planned the afternoon's shoot which took us to the casino (which was closed unfortunately) and the atrium where an All Ireland champion uilleann piper and a local troop of Irish dancers entertained the cruisers to great applause. 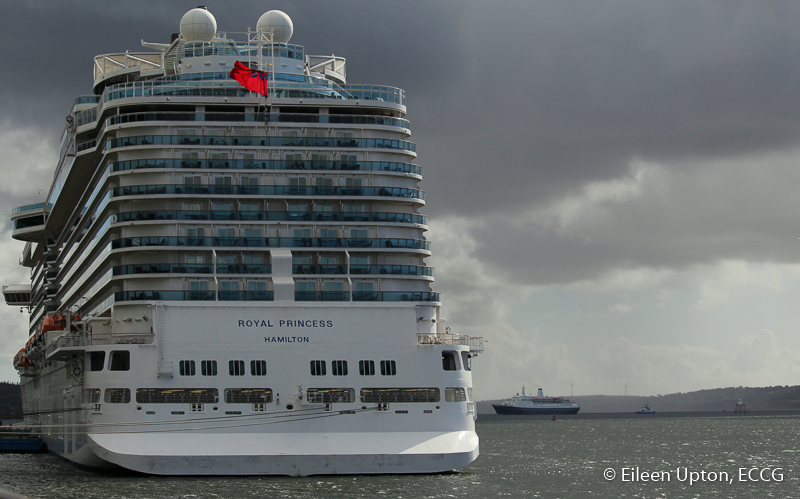 Resisting the temptation to somehow stow away and depart Cork with the mighty ship, we made our way to deck four and the exit where cruisers, who had been ashore, were streaming back to the ship for the 5.30pm 'all aboard' time. With a glance back we marvelled at the feat of engineering and logistics that is the Royal Princess with a more meaningful understanding of the Princess Cruises slogan, "come back new". Our brief introduction to the world of cruise liners definitely left us with a taste for more and I even heard a suggestion that next year the club should have a foreign shoot ..... on a cruise!!

Many thanks to Princess Cruises, Captain Oliver and his crew for a great opportunity and we look forward to seeing you back in Cork again next year.

Click here to see a gallery of images from this shoot. Enjoy!

In one of the most exciting vote counts the Group has seen in recent times, Finbarr O'Shea came from behind to win Grade A in our third internal competition of the year by a single point in the very last vote, with the beautiful image below. The theme was 'Night' and this is how he made it: 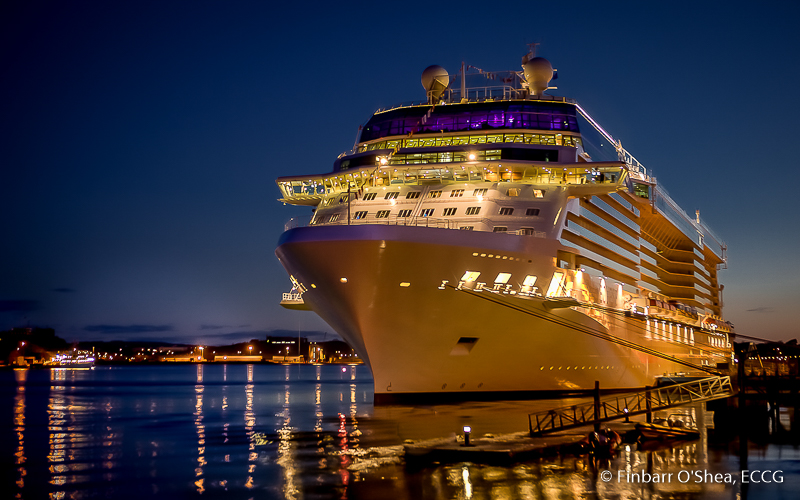 My picture for the night competition was the cruise ship, Celebrity Eclipse.The picture was taken in May 2010 when the ship stayed overnight at Cobh cruise terminal.