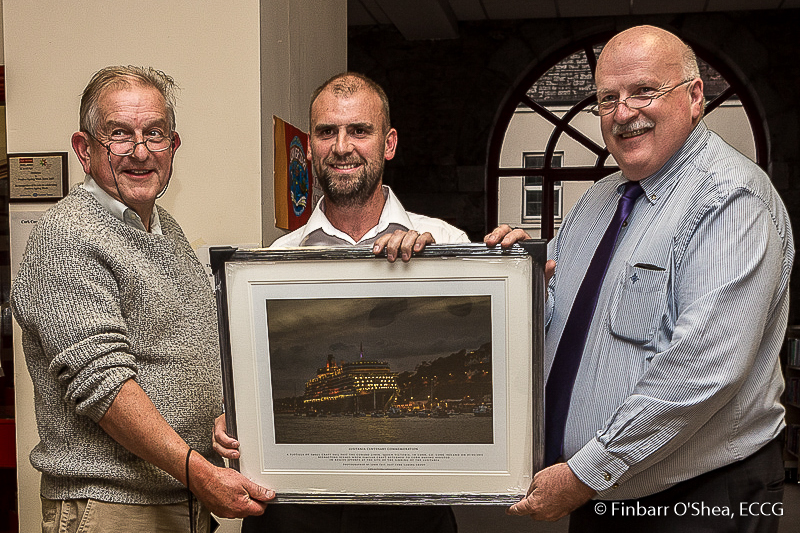 East Cork Camera Group is delighted to host the Press Photographers Association of Ireland Awards 2016 Exhibition at the Library, Main St, Midleton, the launch of which was held on Friday 9th September 2016.

In order to have the exhibition in the town centre for the annual Midleton Food and Drink Festival on Saturday 10th September, PPAI stalwarts, Robbie and Billy put in a superhuman effort in dismantling the exhibition at AIB, South Mall, Cork and erecting it again just a couple of hours later in Midleton all in time for the official launch at 7pm despite a wet Friday evening and its associated gridlock.

The launch was held in the library and was attended by Press Photographer of the Year 2016 and fourth time winner of the title, Mr. Mark Condren of the Irish Independent. A native of Castletownroche, Co. Cork, Mark cut his teeth as a photojournalist with The Avondhu and The Corkman newspapers before moving to the Sunday Tribune and then to the Irish Independent where he currently plies his trade covering news stories at home and abroad.

The event was well attended with all present very impressed by the high standard of work on show. Following some brief words by ECCG Chairman, Denis Barry and Chamber of Commerce President, Seamus Cunningham, Mark spoke of his work as a press photographer over 20 years in exciting and sometimes dangerous places, as far afield as Syria, Nigeria, Haiti, Gaza and the Middle East as well as at home. "The really big news stories of our time are rarely recalled by the written word", he said, "but we all remember the images". He instanced the destruction of the Twin Towers, the recovery of the body of three-year-old Syrian boy, Aylan Kurdi, drowned in the Mediterranean, the assassination of John F. Kennedy and the Black Power Salute at the Olympic Games in 1968 as images that are ingrained in our memories courtesy of the news photographers of the day. He complimented the work of his colleagues on display in the exhibition and exhorted all present to study the images and think of the unique stories behind each one.

To commemorate winning the title and the exhibition's first time in Midleton, Mark was presented with a framed image from East Cork Camera Group's recent Cruise Liner / Lusitania Exhibition. Depicting the reenactment of the return to Cobh of the flotilla of small craft carrying casualties and debris from the site of the sinking of RMS Lusitania, the image was made by ECCG member, John Tait.

The exhibition runs at the Library, Midleton for two weeks and is well worth a visit. Thanks to Ann-Marie Kenneally and the staff of Midleton Library for having the exhibition and to Wallis's, Midleton and Day's of Whitegate for supplying refreshments for the launch Thanks also to Mrs. Ursula O'Tuama for providing the musical backdrop that was woven delicately throughout the evening's proceedings and, finally, thanks to Mark Condren and the PPAI for bringing the exhibition to Midleton and in time for the Food Festival's main event.

In our recent 'Colour Burst' competition, Gráinne Davies came first in Grade A. This is how she made the shot:

The theme of the competition was ‘Colour burst’ so the thinking cap went on as to try to capture something a little different. I have some props at home for some abstract and macro work so I took out my trusty coloured slinky to try to see if I could get any shots to fit the theme. I purchased the slinky on Amazon for a few euro and it’s given me a few good images.

I set up a black background (small black sheet) on a coffee table in a sun room with natural light and set up the slinky in various ways. Key thing here was I wanted to use a slow shutter speed so to capture a blur.

To get this shot I had the camera on the tripod and tilted it downwards so it looked directly down onto the slinky on the black cloth set up in a circle so that it held open and the point of focus was the centre of the slinky. I then used a technique called ‘zoom burst’ where I used the zoom on my lens to create the colour blur. The lens I used was a 24-105mm range so I set up the shot zoomed in on the slinky and then using a slow shutter speed over 1.5 seconds I then manually moved the lens to zoom out slowly and steady until reaching 24mm and the image was captured over the 1.5 seconds. This technique takes a bit of practice to master properly. The slow shutter speed created the colour blur similar to streaking car lights at night.

I shot the image in RAW and converted to JPEG but did very little post processing work as I had done it all in the preparation of my shot so it needed little work afterwards. 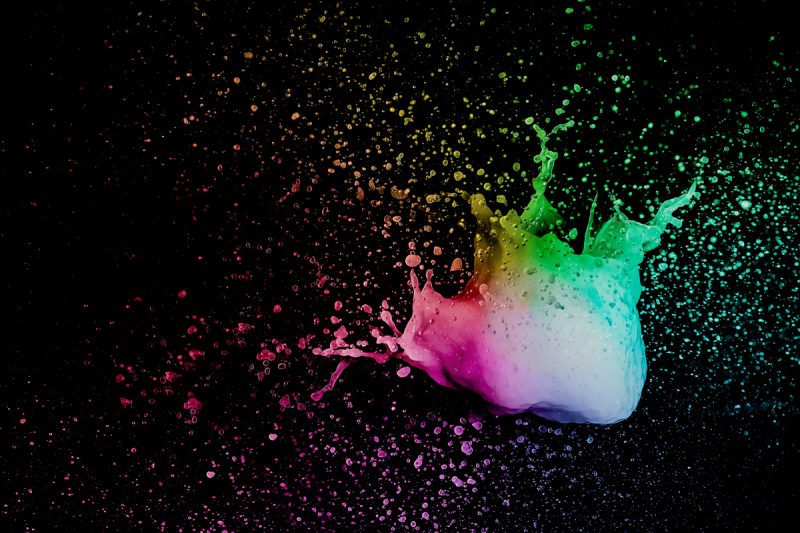 Not only did the image above win Zane Llewellyn first place in Grade B in our recent 'Colour Burst' competition, it also got the overall highest score across all Grades with a comfortable margin. This is how he made the shot:

I’d always wanted to try and photograph bursting water balloons and when I saw the competition theme of ‘Colour Burst’ I knew I’d have to give it a try.

Besides the photography equipment, the main items required  are water balloons and patience!

I turned my bathroom into a mini studio, with the balloons mounted over the bath and a black reflector on the wall behind, the camera was setup on a tripod outside of the splash zone and the flash setup on another tripod closer to the balloons.

To take the shot, I’d have everything ready to go and then I’d turn off the torch, press the shutter, which was set to keep the shutter open for 5 seconds and then pop the balloon with a pin that I’d taped onto a stick.

To trigger the flash I used the TriggerTrap phone app. This uses the phones sensors to trigger the camera or flash, so when the balloon bursts the noise from the ‘pop’ triggers the flash and the burst is captured. It takes a bit of trial and error to adjust the sensor delay so the flash doesn’t trigger too early or late. Also, trying to hit a balloon with a pin on a stick in complete darkness isn’t as easy as it sounds! 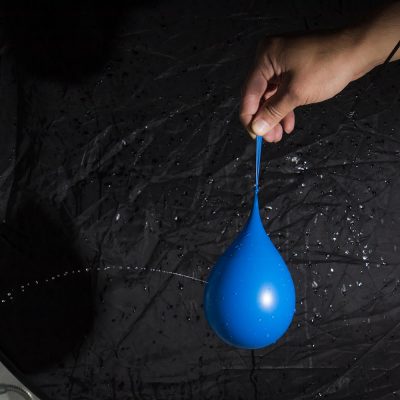 In Photoshop I removed what could be seen of the stick and as the theme was Colour Burst, I created a colour gradient in Photoshop, and used the colour blend mode to colour the water. 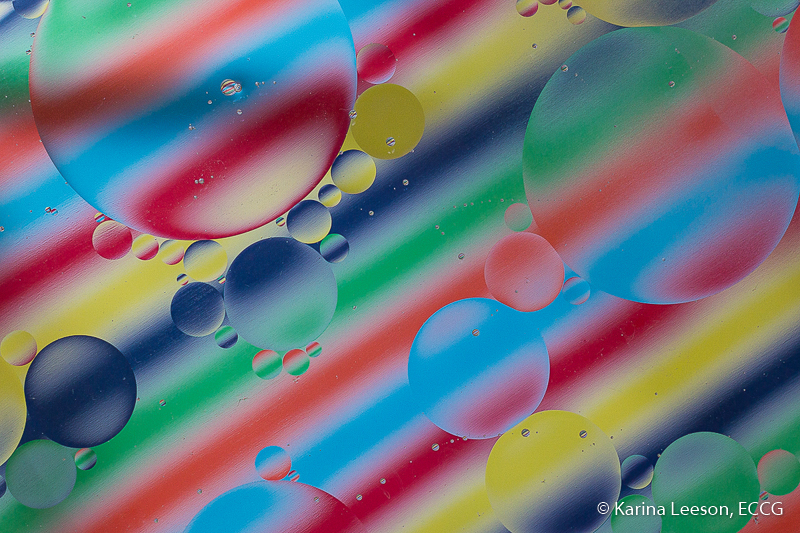 Karina Leeson won first place in Grade C, with the intriguing and colourful image above, in our recent 'Colour Burst' competition held at The Midleton Park Hotel on 06/09/17. This is how she made the image:

This image took quite a bit of time to do but was great fun. 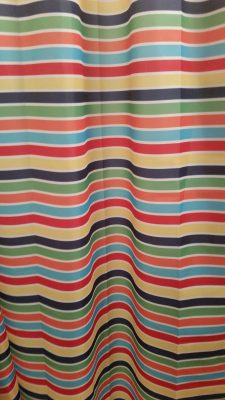 First I got 2 chairs and positioned them a few inches apart and lay the glass from a picture frame across the gap. Then I laid some coloured paper on the ground below the glass. I placed a table lamp on the ground with the light shining on the coloured paper. Next I filled a clear glass bowl with water, poured a few drops of oil in the water and placed the bowl on top of the glass. With the camera positioned on a tripod above the set up I got to work. I took lots of shots with different coloured sheets and wasn't happy with the colours I was getting. It just wasn't vibrant enough.

I was trying to find some really vibrant coloured paper when I remembered the new shower curtain I had bought. It was multi colured stripes and when I laid it on the ground below my setup it gave exactly the effect I had hoped for. 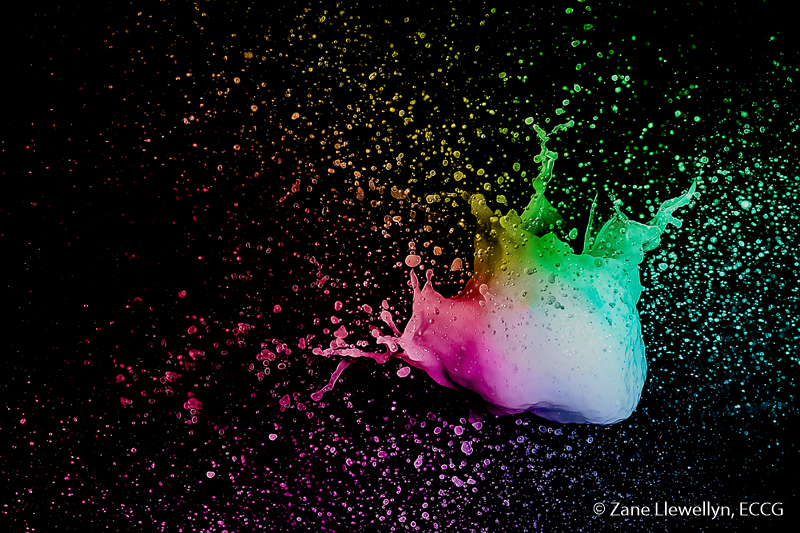 Tuesday 6th September 2016 was the night for ECCG's penultimate internal competition before the annual Photographer of the Year competition in November. The 'Colour Burst' theme provoked some varying interpretations but when the scoring was completed and the points tallied, the places were allocated as follows: 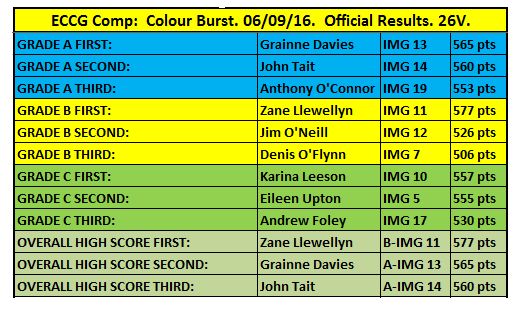 With only five points and seven points separating first, second and third places in Grade A, it was a very close battle between Gráinne Davies, John Tait and Anthony O'Connor all the way through the scoring process.

Grade B was a different scenario with Zane Llewellyn winning convincingly with a score of 577 points for the image above, from Jim O'Neill in second at 526 points and Denis O'Flynn in third at 506 points. Zane's score was enough to give him the overall highest score across all Grades on the night.

Well done to everyone who participated in this competition.