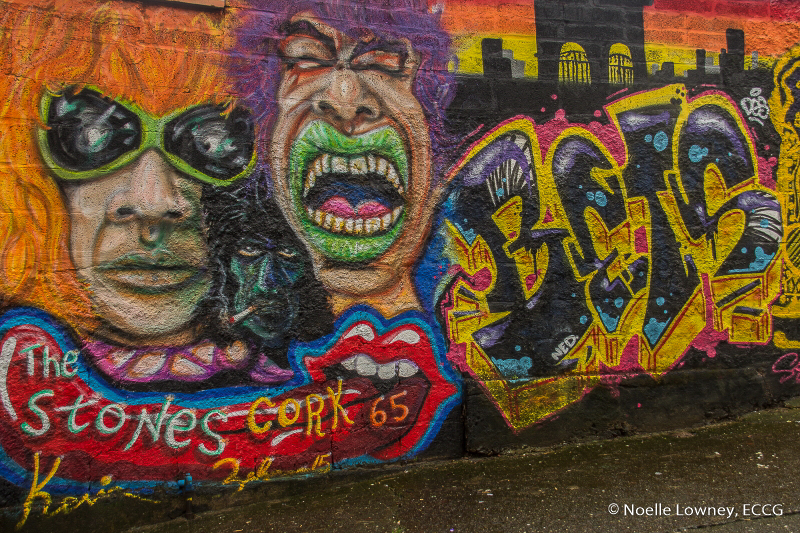 On a wet, dull and overcast Saturday afternoon that was the 13th February 2016, a visit to Cork City was the latest ECCG shoot. After meeting up at Kent Railway Station, the rainy weather did not deter us on our 'tour' of the City in a quest to capture a variety of images from Urban, cityscape and Black & White themes. We embarked on foot (not tempted to hire the Coka Cola bikes!) on a tour of Cork City taking in various landmarks around the city. We were fortunate that the weather started to clear up. No sunshine but at least it was dry so we were spared a drenching.

We made our way across to Parnell Square and onto one of the main streets in the city, St. Oliver Plunkett Street. This street is one of main commercial arteries with a variety of foods and clothes shops, cafes and restaurants. It is also the longest street in the city. We stopped momentarily to take photos of the many side streets located to the right and left of this long street as we went.

We then made our way to the one of the 'jewels of Cork City' the Old English market. This market is one of the oldest markets in Cork with long history dating back to the 1788. It is the main shopping institution with Cork people with its unique character, cosmopolitan atmosphere, vibrancy and rich shopping experience. Various stalls selling a variety of farm produce and a more exotic fare with foodstuffs from all over the world as well as the traditional meat, tripe and 'drisheen and fish. The array of colour provided great photo opportunities in this interesting place.

From the market we made our way onto the Grand Parade, which runs from the South Mall to St. Patrick's Street. We stopped at the National Monument at the end of the Parade. This commemorates the rebellions of 1798, 1803, 1848 and 1867 and is described as displaying an early  Gothic style. From here we continued the shoot, crossing the River Lee via the Nano Nagle footbridge named after the famous Cork woman who founded the Presentation Sisters religious order in 1775.

We then walked to St Fin Barre's Cathedral situated near the heart of City. Before going into the Cathedral grounds we took a detour to the left of the side entrance, up steps towards Barrack Street to view a very colourful urban street art, primarily recalling the Rolling Stones Irish tour in 1965. Once we finished here we returned to the St Fin Barre's cathedral. The building was built in 1863 by the Victorian architect, William Bruges and was dedicated to St Fin Barre, replacing a previous building which once stood on the same spot believed to be the site of a monastery founded by the St Fin Barre in the 7th century. The present cathedral building is from the neo gothic period and is made from Cork limestone, marble as well as Bath Stone. We spent some time in the grounds of the cathedral capturing the immense exterior of this  towering building with its spiky spires, gurning gargoyles and rich sculpture which all contribute to it's magnificent presence and stature.

After the cathedral, the city shoot continued down Crawford street and onto Washington street where we visited an unusual antiques shops with records, relics and other curiosities on display. We then made our way along Washington street stopping to admire and take shots of dynamic artistic wall art painted by local artists as well as some buildings of architectural interest.

Our next 'port of call' was the Mercy Hospital, which is the second largest hospital in the busy city centre. The oldest part of the hospital was built between 1764 and 1767 and was was originally built as the Mansion House for the city's Lord Mayor but was later used as an educational establishment before becoming the Mercy hospital in 1857.

As we made our way back towards the city centre we stopped, en route, to take photos of the red and white wrought iron foot bridge located in the North Mall area and also the very colourful buildings on the other side of the river. As we approached the Corn Market and North Main streets there were more beautiful urban art images to be found. On reaching the top of North Main street we crossed into Paul Street walking to the end of Half Moon street to view the amazing wall art on the side wall of the Cork Opera House. The large mural which runs the length of the street features giant stylised portraits in three tones of electric blue of literary giants such as George Bernard Shaw, WB Yeats, Oscar Wilde, James Joyce, Samuel Becket and more.

We finally made our way to St. Patrick's Street where we went for a well deserved cuppa! Afterwards some of us returned to the railway station via Mac Curtain Street. An enjoyable day was had by all with some great images captured. It was an ideal opportunity to source some black & white, urban and city scape images. A very worthwhile shoot despite a wet start.

See a full gallery of images from the shoot here. Enjoy!