Kevin Dwyer, A.I.P.P.A., photographer and author, was our guest speaker on Tuesday, 20th March last. He spoke to us about his life as lived through a lens beginning with his
family history and how his grandfather began a knitwear business in Cork which developed into the Sunbeam Textile Company. On leaving school, Kevin found himself in the banking world.

He always had a love of photography and, in keeping with the family business, he began his photographic career photographing textiles. This quickly developed into the design of brochures and in turn into printing. He explained to us the different types of print methods used at the time and how he introduced new print methods into the industry. Rather than boring us with too much technical information, he also related some hair-raising moments when photographing models for the Sunbeam brochures when health and safety restrictions were not as they are now!!

His photography expanded into tourism and subsequently the business sector for corporate profiles. His first aerial photographic commission was in 1989 and this took him into the high end of the property market and infrastructural developments which were just commencing in Ireland at that time. He explained to us the advancements that have been made in photography since he began using film to the digital age that we have now. It was very interesting to learn the actual process undertaken by him when he first started his career.

As Kevin always had an interest in sailing, it led him to indulge himself with aerial
photography of the coastline of Ireland and also of Ireland's waterways and he has published three books on the subject.

We were treated to a beautiful display of his work from its very beginning to the last
photographs taken by him before he retired.

A very enjoyable and informative meeting was had by all and we came away truly
appreciating the beauty on our doorstep which we had just encountered from a completely different perspective.

Despite a delay at the start of our meeting due to a technical glitch, the ensuing slideshow and presentation were worth waiting for. One couldn't hear a pin drop as images moved from landscape to seascapes to portraits. William spoke and gave an account on every image and it was easy to see how his images have been accepted in many International exhibitions earning him three Gold medals to date.

We were then treated to a look into Glenstall Abbey and the story of how he came to
capture such amazing images there. William explained his printing methods to the group which was also of great interest. Having viewed the images on screen we were then able to view the original images which he had brought along for us to see.

An excellent and enjoyable evening was had by all.

On Tuesday, 23rd January our guest speaker for the evening was Dave Harris, L.I.P.F.
from Cork Camera Group. Dave got a very warm welcome as he stood in front of us as he was known to quite a few of our members and his images were already known and appreciated by many of our Group.

He began the evening by demonstrating some "tricks of the trade". He had brought along some props with him and they were passed along the audience. Sometimes all is not what it seems in a photograph. It was amazing to see and learn how to trick the human eye!

Dave then produced some portrait images taken by him. He passed them around the
audience and explained the different types of paper used in the printing of each one. It
was very interesting to see how the quality of the paper can make such a dramatic change to any image.

We were then treated to some of his wildlife and landscape portfolios. His images were
both breathtaking and inspiring and generated many questions from the floor.

It was an evening thoroughly enjoyed by everyone in attendance.

On Tuesday, 9th January, the Group was given a double treat as we had two speakers for the night, namely Ann Francis and Vincent Kelly, both members of Cork Camera Club.

Ann began the evening by showing us some of her portrait and landscape images. She then went on to show some macro images of flowers and butterflies which were truly amazing. Next, she produced some travel images and told us of her many trips abroad and told the story behind each image. Her love and enthusiasm for photography was evident in every word.

Vincent then stepped up to take the floor to show us his portfolio. His portraits, landscapes, wildlife and travel images were absolutely inspiring. He told us that he often travels abroad with Ann and the Cork Camera Group. He too related stories and showed images of their adventures.

They both spoke of the work they put into their images in post-processing and explained
how some of their composite images were created. The imagination and expertise in the works they create had everybody blown away. As their images were passed around the audience for everyone to see, it was evident that their work was appreciated by one and all.

A thoroughly enjoyable and informative meeting was enjoyed by everyone. 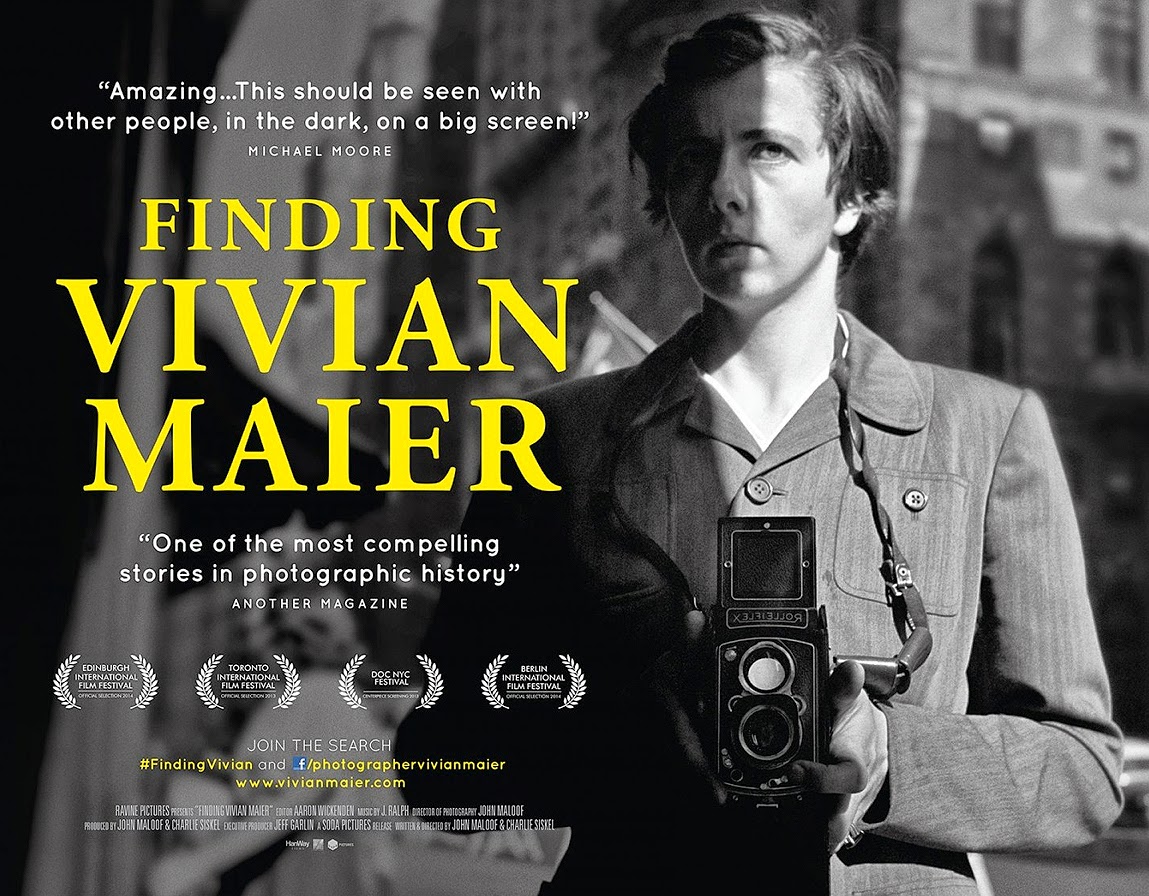 As you can see from the movie poster above, Michael Moore said of the film, "Finding Vivian Maier", "Amazing...This should be seen with other people, in the dark, on a big screen!" and this is exactly what ECCG did recently at its final, regular meeting of the year at The Midleton Park Hotel. East Cork Cinema Club set up a cinema, complete with big screen and stereo sound, in the boardroom of the hotel for a private screening of this compelling documentary.

The true story is about the late Vivian Maier, a nanny whose previously unknown cache of over 100,000 photographs earned her a posthumous reputation as one of the most accomplished street photographers of all time.

The website IMDb charts the plot as follows:
Real estate agent John Maloof explains how a trip to a local auction house, in search for old pictures to use for a history book about his neighborhood, resulted in him bidding and winning a box full of old negatives. John goes through the massive quantity of negatives, describes how impressed he is by the quality of the images, becomes quickly determined they are not reverent to his project and just puts them away. That could have very likely had been the end of the story, if the power of the images had not pushed him to fall in love with photography. John confides that his photo hobby quickly motivated him to set up a darkroom and devote large amounts of time shooting. As he learned more about photography, he recognized that those negatives he had bought, then stored, were the work of a real master. In an attempt to confirm his suspicion, he selected about 100 images and put them online with the hope that the feedback would confirm his judgement as to the strength of the images. Written by Lane J. Lubell of Cinemashadow.com

See the Official Movie Trailer  below:

East Cork Cinema Club meets monthly, upstairs at the Cobh Community Centre on the second or third Monday of the month (see facebook page for more details), from the end of August to May of each year. Doors open at 7.30pm and screenings are at 8pm. They screen a great selection of International films and are part of the Access Cinema Group who are funded by the Arts Council. Their upcoming screenings will be the French comedy, 'Marguerite' on 28th November and 'Double Indemnity' on 12th December next. Admission includes: Wine, Tea, Coffee, Home Baking and a little Finger Food!

Thanks to John and Ben for all their hard work setting up and breaking down the gear and for a marvellous evening's entertainment.