Adobe has announced that 2.9 million customers' details including credit/debit card details have been stolen in a sophisticated on-line attack.

Get the full details here. 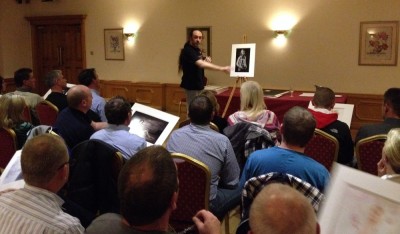 ECCG recently invited Cork photographer, Michael O'Sullivan to address the Group. The air of anticipation was evident in the large attendance who were eager to pick up some morsel of expert knowledge that might make the difference in making their 'next great photo'. He did not disappoint.

As he prepared beforehand, it appeared that he had brought along a veritable collection of his work as he created stacks of his mounted images in readiness for his presentation.

Michael thanked the committee for the invitation to talk to the Group and complimented the great atmosphere he always found among the members of ECCG whenever he attended.

He said his involvement with photography went back a long time and there are very few areas of it that he hasn't experimented with at one time or another. Despite this, he has become known for certain types like landscapes, portraiture and 'dark stuff' etc. because of various panels he has produced over time to gain distinctions from the Irish Photographic Federation and Royal Photographic Society (Michael holds Fellowship Distinctions from both organisations).

Photography for him is an ongoing journey and the day he gets bored with it or comes to a state of stagnation is the day he will quit it, he said. While he does quite a lot of portraiture and PR work, landscapes are his 'hobby'. He likes nothing better than to go off into the wilds of West Cork and immerse himself in the natural beauty of the place regardless of weather conditions.

He said that too often photographers get stuck in a rut, see a photo they like and try to emulate it instead of wondering how they can apply what they like in the photograph to their own photography and give it their own expression. Landscapes aren't new, portraiture isn't new but when you're trying to gain distinctions, you must show that you are pushing the boundaries in your work to communicate your vision and show the judges something they haven't seen before. There are varying views on how that should be - some people are all about the vision while more are all about technique. There's a balance to be struck. Michael then showed his images, one by one, and spoke about the inspiration and execution of each finishing off with his 20-image panel with which he was successful in attaining his Fellowship from the Royal Photographic Society.

Several hours later, after Michael had exhausted his audience with mythology, superstition, famous painters, photographic technique and exquisite photography in his trademark fast and humerous delivery, ECCG chairman, Tom Tattan, normally not one to be stuck for words, declared his mind blown, which was, in a nut shell, an accurate assessment of Michael's rich and knowing presentation.

Michael stayed on for quite a while afterwards answering questions and talking photography to the members who were all suitably impressed and inspired by this modern-day photographic artist.